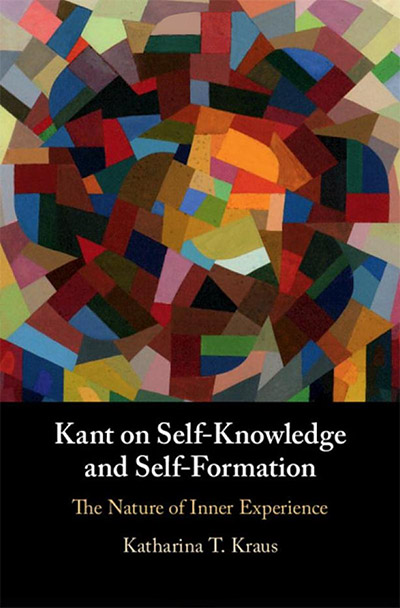 In my book Kant on Self-Knowledge and Self-Formation (Cambridge University Press, 2020), I develop a novel interpretation of Immanuel Kant’s theory of empirical self-knowledge and the self-formation of individual persons. Despite the huge amount of work devoted to Kant’s conception of the thinking subject, surprisingly little work has been offered on the question of what, according to Kant, makes us the individual persons we are. The few interpretations available differ hugely over questions such as what, for Kant, an empirical self or person is and whether Kant allows for a substantial notion of empirical self-knowledge.

My book not only offers systematic discussions of central themes, such as the perception of one’s own mental states, the reflexivity of consciousness, kinds of self-consciousness, personal identity, self-reference and the self-ascription of mental properties, but also transforms our understanding of human individuality in Kant by fundamentally rethinking the role that reason (Vernunft) plays in it.

The first main thesis of the book is that inner experience is empirical cognition (in the Kantian sense) of oneself as a psychological person, rather than as a mere object. More specifically, I cognize myself only qua my psychological features, including occurrent mental states and more temporally stable psychological properties, rather than as a persistent mental substance. Such self-cognition not only must meet the sensible and conceptual conditions of cognition, but also requires the regulative use of an idea of reason, the idea of the soul as the concept of a unified mental whole.

The second main thesis is, then, that persons form themselves in the course of realizing their mental capacities under the normative guidance of the idea of the soul. A person is an empirical reality in the process of becoming – a process that is guided by a rational ideal. My interpretation finally suggests that the way in which Kant conceives of personhood is closer to an Aristotelian soul-form, than to a Cartesian mind-substance. The book has been discussed in four international book symposia. A set of comments and replies is forthcoming in the Review of the Society of German Idealism and Romanticism and explores a comparison of my interpretation of Kant with central ideas of German idealism, specifically with J. G. Fichte’s doctrine of self-positing.